2017 is undoubtedly THE year of Latin Music and YouTube has played a critical role in allowing artists like Luis Fonsi, Daddy Yankee, Ozuna, J Balvin, Maluma and more reach the genre's widest audience ever.  At the start of the year, only five Latin music videos had reached a billion views and today, that number includes 20 videos with over a billion views each.

Summer smash “Despacito” was one of the biggest success stories of 2017 and the first (and still only) video in YouTube history to reach more than 4 BILLION views. A further example of Latin music’s marquee year on the platform is six of the top 10 videos released on YouTube in 2017 feature Latin artists. And, YouTube recently produced a documentary with Ozuna, one of Latin music’s biggest rising stars who had a breakout year with his debut album and currently has over 4.9 billion views across YouTube in 2017 alone.

The explosion of Latin music is evident in the ever-growing list of pop stars collaborating with Latin artists, with videos featuring Beyonce, Justin Bieber, Fifth Harmony, French Montana, Chris Brown, Little Mix, Alesso, and Major Lazer all drawing in big views from around the world.

“The massive success of Latin music on YouTube in 2017 speaks to the true global power and reach of the platform,” said Lyor Cohen, YouTube’s Global Head of Music. “It’s remarkable to see this traction happening and amazing to see Latin artists building a global fanbase.”

“Music is a common bond which connects our users emotionally and culturally,” said Sandra Jimenez, Head of Music, LATAM, YouTube & Google Play Music. “YouTube has no borders and it’s exciting to see Latin music resonate with not just Latin users, but fans throughout the world.”

To demonstrate the explosive growth of Latin Music on YouTube in 2017, following are facts about how the genre crossed borders and reached a global audience.

Explosive Growth (in numbers) of Latin Music on YouTube in 2017:

Latin Music Videos That Entered the Billion Views Club in 2017:

Six of the Top 10 Videos Released on YouTube in 2017 Feature Latin Artists: 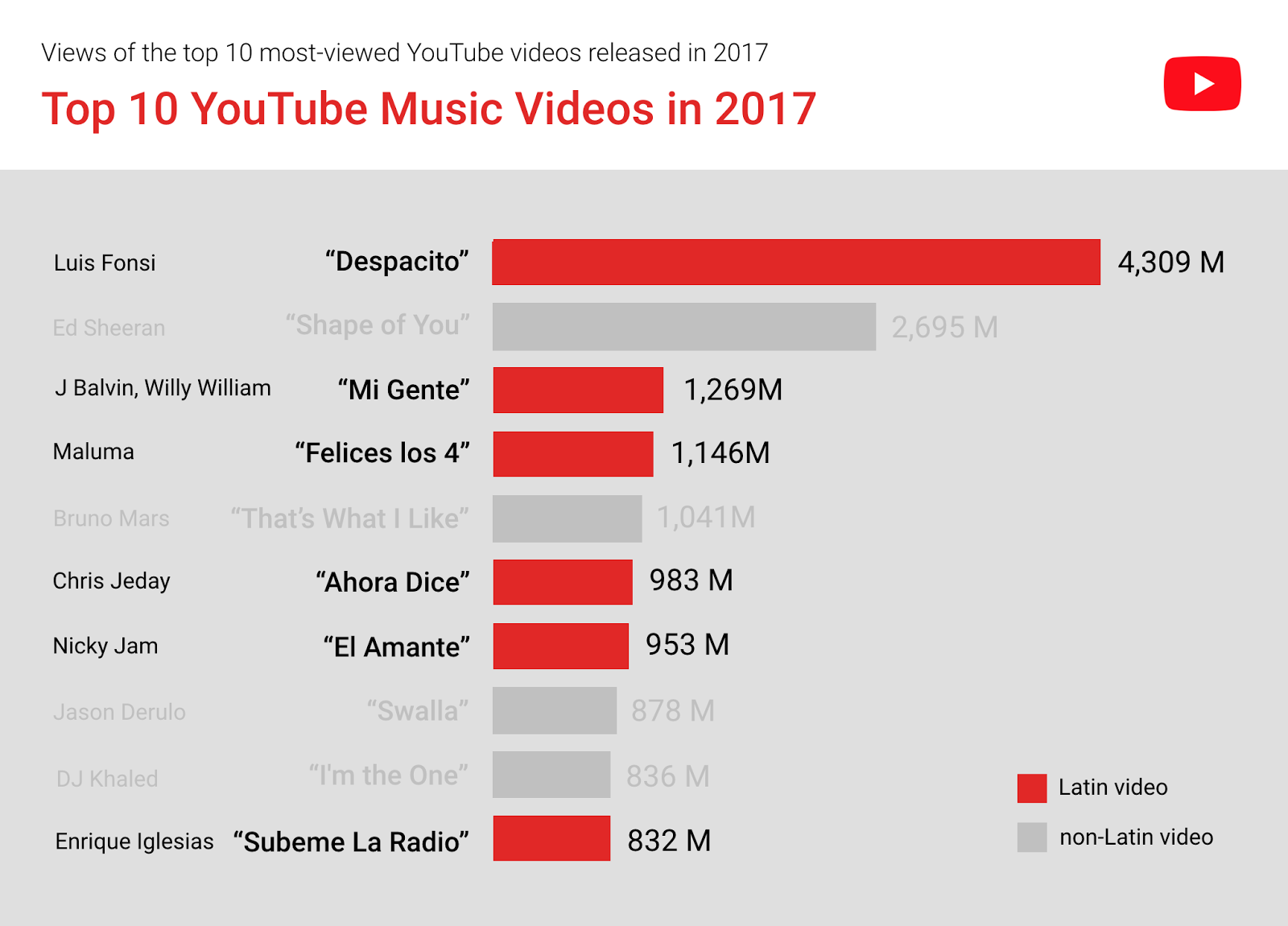 Top 10 Latin Videos of All Time: