An optimistic rap jam built on irresistible drum loops and simple, buoyant keys, "iSpy" may be the sunniest song of the spring. Yet according to Kyle, the 23-year-old rapper behind it, "iSpy" actually began during a studio session that was yielding mostly downers.

"I was on like my seventh sad song, and I decided enough is enough," Kyle recalls. "I needed a pick-me-up. So I told my producer Ayo that we needed to make the happiest song we'd ever heard in our entire lives."

If the response on YouTube is any indication, it looks like they succeeded. Aided by a guest verse from Lil Yachty, the Artist on the Rise-featured song immediately went viral. At press time, the track sits at #18 on the YouTube Music Chart, powered by a lyric video that has accumulated 41.7 million views and a recent music video that has scored over 18.5 million more.

These numbers are even more impressive for a song that Kyle refers to in the lyrics as "just a throwaway."

"I 110 percent meant that," he insists. "I had a plan to put out a song every month, one a month, and they'd just be little teasers. But the day after 'iSpy' came out it and got like 3 million plays, I was like, 'Oh my God. This is crazy.'"

So how'd it happen? Kyle shrugs, attributing its success to two sources: the power of the internet and "the man upstairs." "I think God was probably like, 'Yo, I think we're gonna help this kid out. Let’s make this go viral."

A slightly more down-to-earth answer starts with YouTube itself. "My entire career, I owe it all to YouTube," he says. "Without a YouTube, there would not have been a Kyle.”

"YouTube was the first platform that gave all the power to [new] artists,” Kyle adds. “YouTube put power into the hands of any kid with a dream. I watched Odd Future blow up on YouTube. Mac Miller, Wiz Khalifa, Big Sean — they blew up off just creating something they thought was dope and presenting it to the world."

The longer story goes back to the rapper's misfit childhood in Southern California. Born to a black father and a white mother, Kyle felt out of place at both his first school in the Valley, where the student body was almost all black, and his second in Ventura, where most of his classmates were white. He didn't learn to feel comfortable with his own identity until he joined high school theater, playing Seaweed in “Hairspray.”

"If you have no game, take a theater class and they will bring you out of your shell," he says. "Doing drama showed me the rest of my personality, which was this quirky nerdy dude."

When he brought this back to hip-hop, everything began to fall into place. For years, Kyle had recorded raps, usually writing hardcore lyrics in tune with what was popular on the charts. But in 2011, his friends convinced him to record new freestyles over some of the year’s best beats. That’s when he revealed his inner theater kid for the world to see. Rather than keep a straight face, he cracked himself up with punchlines about “Star Wars” and breakfast cereal.

"It was almost like stand-up,” he says, laughing. “It sounded terrible, but I guess my personality kind of shined through."

Terrible or not, the approach worked. Posted to YouTube under aliases like K.i.D and Kid Cash, some of the songs began to find an audience, catching the attention of fans who are still with him today. "When I got like 50,000 plays the first day,” he says, “I felt like I was 50 Cent."

Riding this surge in attention, Kyle released his first album, “Beautiful Loser,” in 2013, and in 2015 he appeared alongside Chance the Rapper, Big Sean and Jeremih on Donnie Trumpet's "Wanna Be Cool." Later that year, he released “Smyle,” an LP that spotlights the joyful beats and earnest playfulness that defines Kyle's music today.

He also linked up with the director Jakob Owens, who provided his songs with visuals as striking as the music. "He just took his camera and was like, 'Alright, this is you. Let's show it to people.'"

Kyle's channel views had steadily climbed since he released his song "Keep It Real" in 2013, but soon he was ready for an explosion. That came with "Doubt It," posted to YouTube last October. The rapper contrasts the surprise success of "iSpy" with the anticipation he felt before "Doubt It." "I felt myself turning a corner," he says. "I was like, 'Okay, I know what sound direction I want to go with, I know how I fit in, and I know exactly how to do this.'" 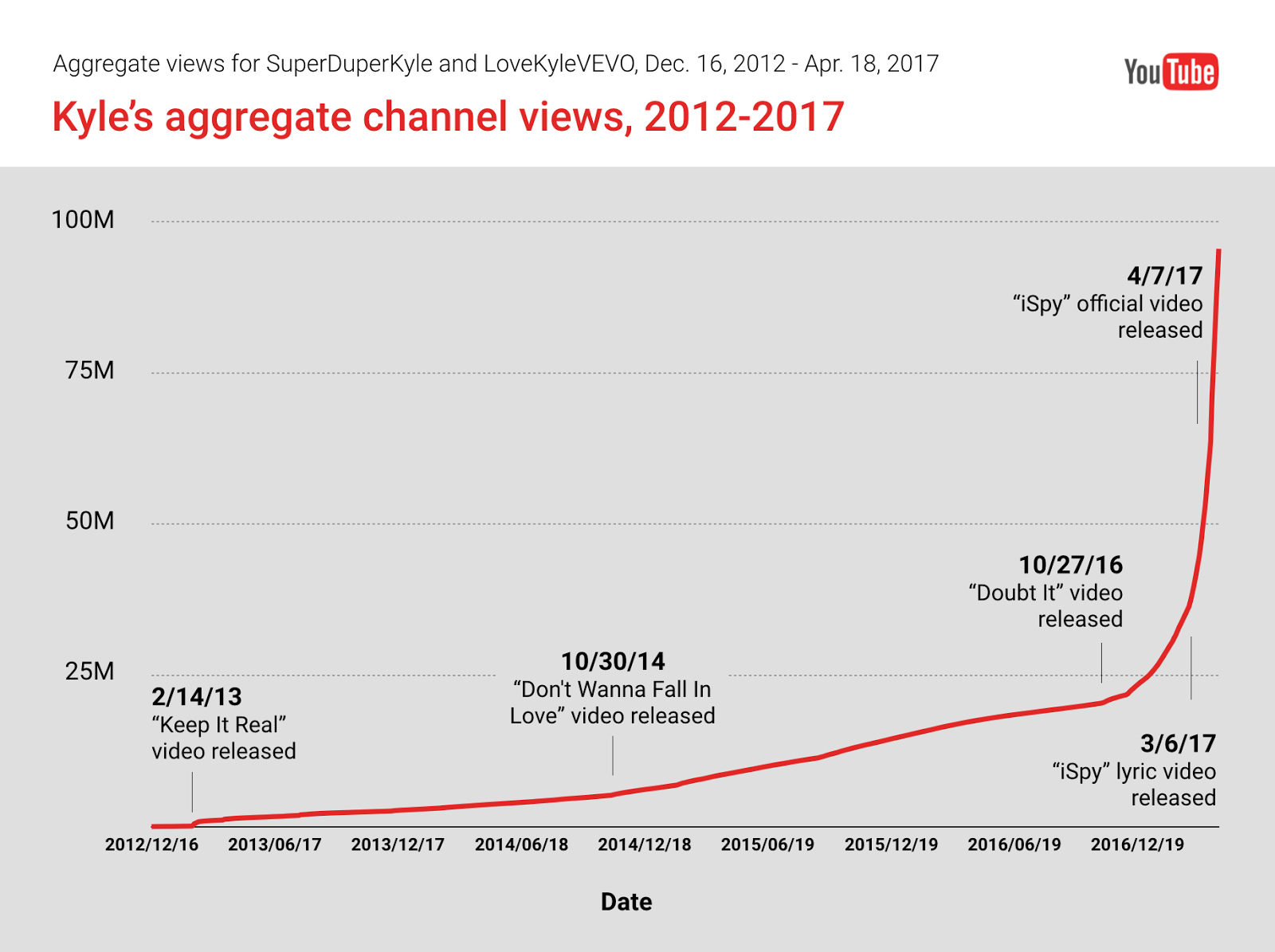 Now he wants to push that direction further with a new album that delivers on the success of "iSpy." One challenge will be how to properly portray the subtleties of his worldview, which is positive without being unrealistic.

"The outlook I try to show is not just 'Be happy all the time,'" he explains. "It's, 'Life is gonna suck at certain points, but you always have an opportunity to find something in that moment to appreciate.' It's not about being happy every day, it's about fighting to be happy every day. The moment you give up the fight, that's when sh*t gets bad.”