"Despacito" is now the most viewed video in YouTube history

Only 204 days after first being uploaded to YouTube, Luis Fonsi and Daddy Yankee’s breakout hit “Despacito” has officially become the most viewed video in YouTube history. And with 3,000,730,629 views and counting, the video today also became the first to reach the once unfathomable 3 billion marker on the platform. 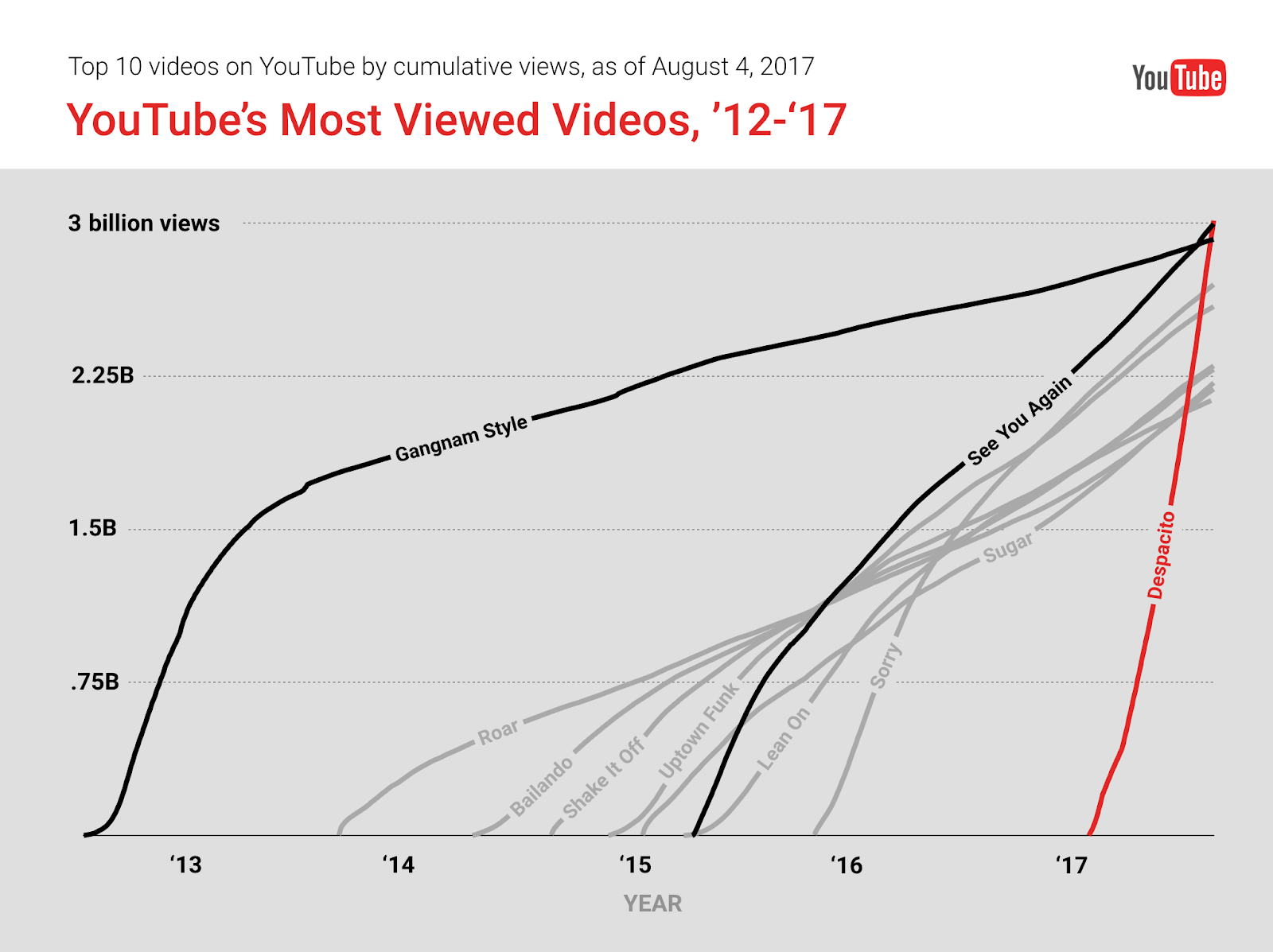 “Breaking the record for most viewed video of all time on YouTube is truly incredible, not only for me but for Latin music and our culture.” Fonsi explained in a statement. “Working with a platform like YouTube has allowed our song to reach audiences all over the world, something that just a decade ago was nearly impossible.”

The new record comes less than a month after Wiz Khalifa's “See You Again” took over YouTube’s top spot from PSY, who held the crown for over four and half years with his ubiquitous clip for “Gangnam Style.” And while the previous record holders and other YouTube heavyweights like Justin Bieber - “Sorry,” Mark Ronson - “Uptown Funk” and Major Lazer - “Lean On”  have displayed impressive trajectories, nothing quite compares to the unprecedented growth of “Despacito.” Averaging 14.5 million views per day since upload, the video already owned the record for fastest video to 1.5, 2 and 2.5 billion views, reaching each of those milestones in less than 1/2 of the time of the previous record holders. See how other top viewed music videos on YouTube compare to Luis Fonsi and Daddy Yankee’s collaborative effort here.

Today’s numbers are just the latest in a growing list of accomplishments for the international chart topper, which last month became the most liked video on YouTube. The clip is currently the most viewed video of the year in over 40 countries, earning massive numbers in every corner of the world — 385 million views in Mexico, 224 million in Brazil, 146 million in Italy, 85 million in France, 41 million in Indonesia, 33 million in India, 18 million in Israel, 10 million in Egypt, and millions more throughout the globe.

But Luis Fonsi and Daddy Yankee are not the only Latin artists currently experiencing a massive growth spurt, with acts like Nicky Jam, Maluma, J Balvin, and Ozuna each already earning over 1 billion views across YouTube in 2017. Around the world, monthly view counts for top Latin acts have skyrocketed since this time last year, growing 940 percent in Indonesia, 821 percent in the Philippine, 463 percent in India, 284 percent in South Africa, 260 percent in Israel, 270 percent in New Zealand, 237 percent in Turkey, 178 percent in the U.K. and 110 percent in Canada. And as further proof of the explosion, Latin artists make up a full 1/3 of the slots on this week’s YouTube Global Tracks Chart.